Enter your City name or Pincode

The census town Adalaj in Gujarat is very popular for its places of worship which attracts numerous devotes from all the parts of the nation towards its grounds. As the town is strong in its roadway transport system travelling to the places of interest in Adalaj is not a hassle. 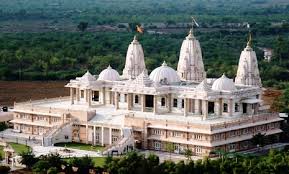 The Trimandir in Adalaj is a very popular religious destination built by Dada Bhagwan foundation. The Mandhir has a striking architectural style depicting its uniqueness in temple architecture. The name Trimandir is based on the three residing deity of the temple namely Lord Simandhar Swami, Lord Shiva and Lord Krishna. This is the main distinct feature of the Adalaj Trimandir. The Mandhir is a two storey building. The ground floor of the Mandhir has a massive hall with an apex of 108 feet height. The main feature of the ground floor hall is the carvings on a pink sand stone.

The first floor of the Mandhir is the temple. The main hall in the first floor measures ten thousand sq feet while the dais in the hall measures twenty thousand sq feet with three sanctums. The centre sanctum of the hall homes the idol of Lord Simandhar Swami. The idol is of 13 feet height. Either side of the Lord Simandhar Swami idol has idols of shaashan Shree Panchanguli Yakshini Devi and shaashan Shree Chakeshwari Devi.

The extreme ends of the Trimandir homes Sant Shiromani Shree Sai Baba and Shree Padmanabh Swami Prabhu who is the first Trithankar of upcoming era. The idols in Trimandir are Shree Ajitnath Bhagwan, Shree Parshwanath Bhagwan, Shree Chakeshwari Devi, Shree Padmavati Devi, Shree Mahavir Bhagwan and Shree Rushabdev Bhagwan. Within the Mandhir premise also located a museum and a mini theater which displays a life of Param Pujya DadaShree who was a spiritual leader and the creator Akram Vignan movement under which Dada Bhagwan foundation operates.

Adalaj stepwell or Vav is the most popular places of interest in Adalaj. The stepwell has five stories with three entrances. The stepwell walls have beautiful designs of flowers, birds, ornaments and fishes. During ancient times the stepwell was visited by numerous travellers and traders who were travelling on long travelling routes also the stepwell served as a source of water for the locals to drink, wash and to bath. Adalaj stepwell in well known for its festival celebrations and spiritual ceremonies.

The Adalaj stepwell was built by Muslim King Mohammed Begda. Initially Adalaj was ruled by a Hindu King Rana Veer Singh from Vaghela dynasty. King Rana was the first to start the construction of the stepwell to gift his beautiful wife Queen Rani Roopa in 1499. On the same time King Mohammed Begda who was ruling the neighbouring kingdom invaded Adalaj and killed King Rana. The death of King Rana gave the Queen a deep sorrow.

The stepwell follows a unique Hindu and Islam architecture. The five floors well was built in sandstone with Hindu, Islam and Jain elements depicted on its walls. Each floor in the stepwell is very spacious and has air and light vents. The top of the well is open to sky to receive rain water and it is octagonal in shape rested on numerous big pillars. Three steps in the first floor lead to the well water.
The four corners of the well have four rooms with decorated windows. The bottom of the step well is a square stepped storey above which the stepwell pillars, beams and wall are constructed which extends till the top of the stepwell.

The stepwell premise also found six tombs which were said to the tombs of six masons who constructed the stepwell who were put to death by King Mohammed Begda knowing the fact that they could build similar stepwells again but the King doesn’t want any replica of the monument.

Are you a Business Owner?

Add the products or services you offer